A poorly kept secret about myself is that I am a HUGE geek! I was raised watching Xena the Warrior Princess and Star Trek (Next Generation and Deep Space Nine). And my geekiness doesn’t stop there. I spent my honeymoon in New Zealand in order to see the Shire and other locations used in the making of the Lord of the Rings. I have also been to New York Comic Con, and dream about going to San Diego’s Comic Con. So to say I am a geek, is a bit of an understatement…

Below is a list of some of my favorite Geeky Locations:

NYC is definitely a geeky city. No only is it the home of Spider Man, but also NY Comic Con, and many other geeky movies and tv shows. So this won’t come as a surprise that it is full of geeky locations…

As any good Doctor Who fan know, there has only been one episode of Doctor Who filmed in NYC. And it is arguably one of the saddest, where we say goodbye to Rory and Amy. There is a scene near the beginning of the episode where the Doctor and Amy are leaning back to back reading on top of a large rock, with some NYC skyline in the background. Well I have located this spot, and try to visit at least once on my NYC visits. The “Doctor Who Rock” is in Central Park so it is easy to get to and a great spot to have lunch or a snack while you people watch. 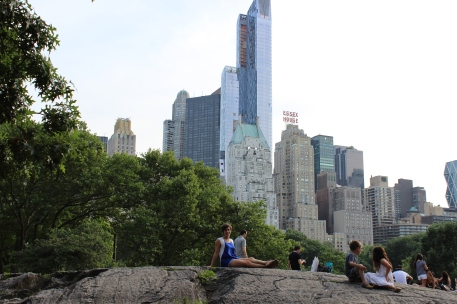 The Waystation is a charming bar in Brooklyn well known for its Tardis bathroom. The outside of the bathroom looks like the Tardis and the inside is decorated with Doctor Who classics and even signed by some of the stars. On top of being a very geeky bar, it also host some fun events, like trivia nights and local, eclectic bands. 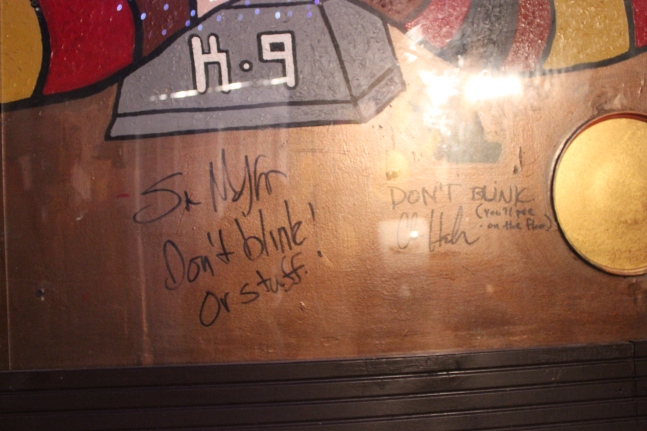 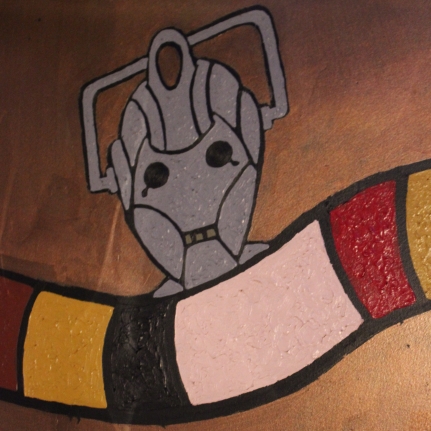 Opened in 1997, Midtown Comics is one of NYC’s biggest and most famous comic book stores. The original Midtown Comics is also located in Time Square making it a convenient place to visit while exploring the city. 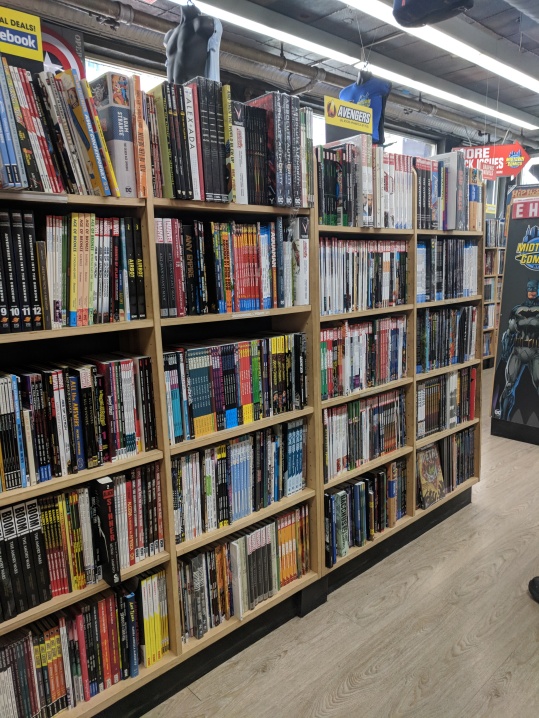 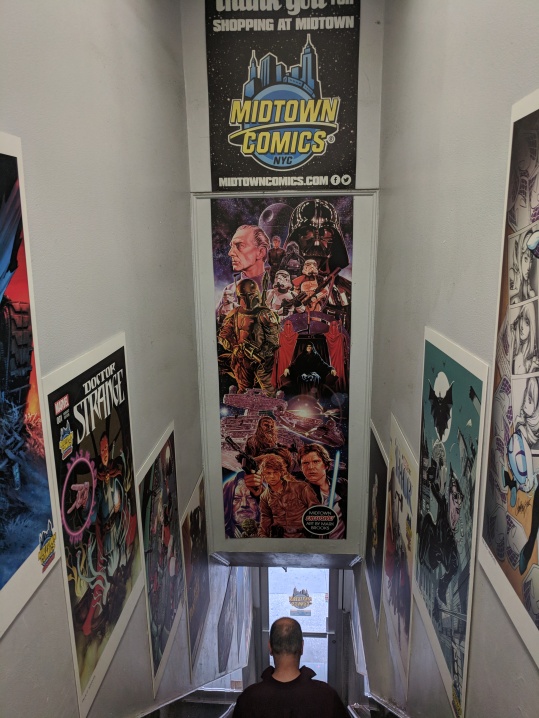 Every October you will see Jedi’s, Super Heroes, and other well known characters riding the subway and walking the streets. When this occurs you know it is NYCC! Well over 100,000 fans flood NYC to express their love of all things geeky. I thought I was prepared when I attended NYCC in 2016, but I was wrong! The geek love is overwhelming and contagious. And there are more things to do and see than you could possibly fit into your day. Even if you can’t get NYCC tickets, I would recommend just stopping by/near the Javits Center to catch some of the geekiness! 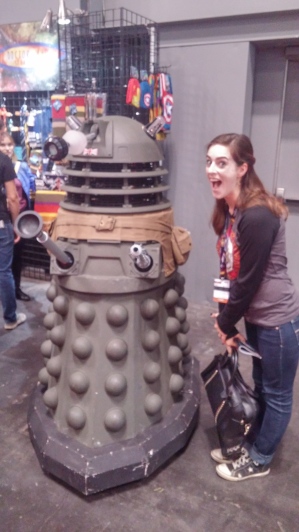 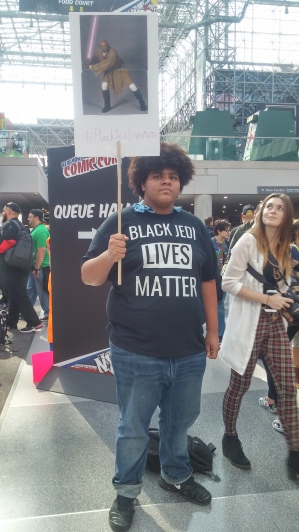 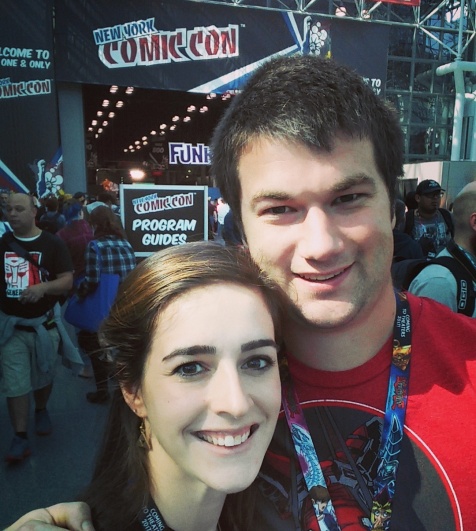 Personally I have only been to the Wizarding World in Los Angeles, California. From friends who have been to both, the say that Florida’s is bigger and better. However, the California one was incredible! I felt like a child again. I was practically running around with my mouth open the whole time. The rides are incredible, you’ll never want to leave! You can also buy a “magical” wand that lets you interact with various shop windows, and cast spells. It also helps that all the staff are in costume, and clearly love working there and pretending Hogwarts is real!

*I heard, but can’t confirm that if you show up in costume, you can skip some of the lines… 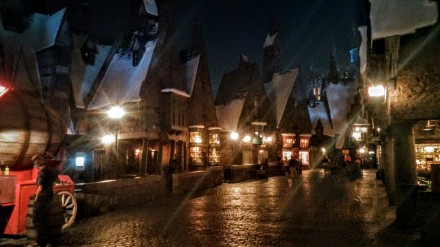 I can’t leave Disney World off the list… Disney now officially owns Marvel and Star Wars, so Disney World makes the list. My favorite ride in Disney was the Jedi ride: Path of the Jedi. Plain and simple it is a great ride, but add on the fact that it’s Star Wars themed and it’s even better! I am really looking forward to the Star Wars themed hotel they are planning to open. Guess who will be back when that happens. 😛 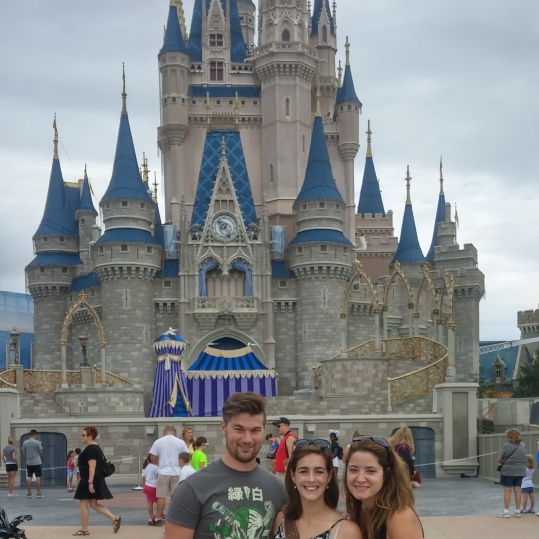 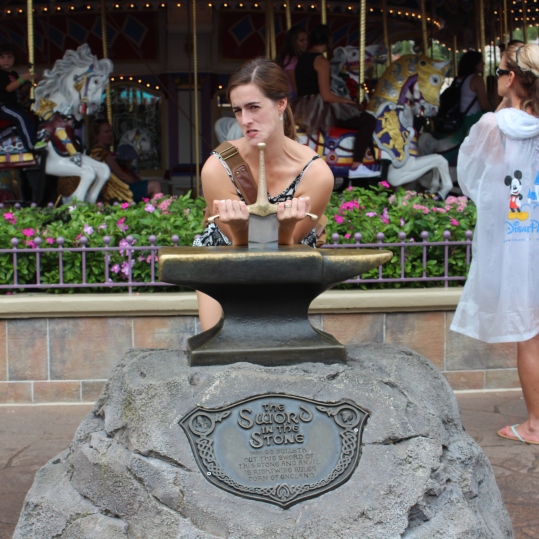 Located near Clerigos Tower & Church, this bookstore is conveniently located, and a must see for muggles. Prior to writing Harry Potter, J.K. Rowling lived in Porto, and is said to have frequented Livraria Lello. This gorgeous bookstore, with it’s grand staircase is rumored to have been an inspiration for Hogwarts. Even if it wasn’t one of her inspirations it is still a gorgeous bookstore and worth a visit. It’s just 4 euro to enter and pretend you’re in Hogwarts! 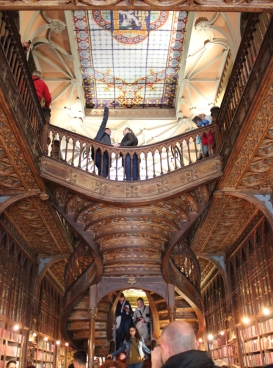 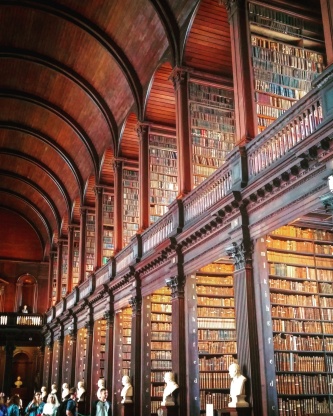 Lough Tay (commonly known as Guinness Lake) is located in the Wicklow Mountains. It received its nickname due to it sharing a border with a large estate owned by the Guinness family. It is also said to look like a Guinness with its white sand beach on only one shore. The lake lays between two mountains, making it a striking view.  But more importantly it is also one of the film sites for The Vikings. Staring down at the lake you almost expect to see Ragnar Lodbrok walk up to the water and sail away. 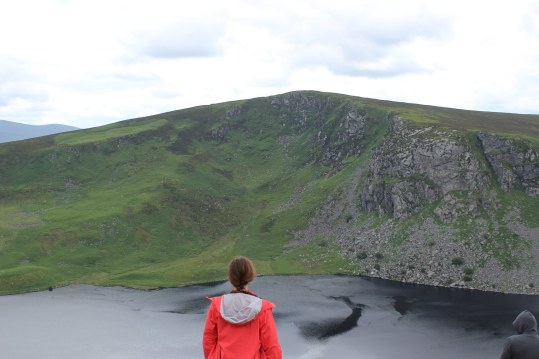 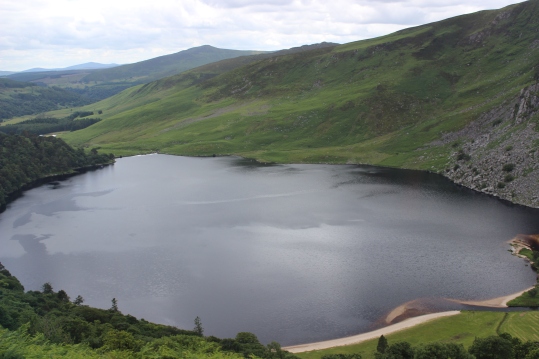 I am not kidding when I say there is an actual tardis blue Police Box in London. With an actual Police officer manning it. I don’t know what else to say… It’s an actual Police Box… You can find it at 236 Earls Court Road, Kensington, London. Let’s hope the Doctor remembers where to find it. Till then, it’s for geeks to enjoy! 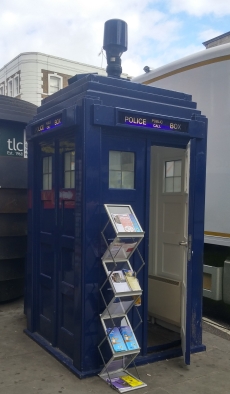 The Who Shop & Museum, London, UK

I have not personally been to the Who Shop & Museum, but as a good geek, I have heard of it. The shop sells all things Doctor Who merchandise. It also includes a small museum with props and original costumes. This Doctor Who heaven can be found at 39-41 Barking Road, London.

Glenorchy and specifically Paradise are where multiple scenes from Lord of the Rings and the Hobbit were filmed. On top of this, it is simply a beautiful place (much like the rest of New Zealand). Paradise Valley is where Isengard was “located”. Looking at the beautiful valley with the mountains in the background it was easy to imagine Isengard standing there. You couldn’t escape the feeling that Gandalf would just happen to walk by.

I explored Glenorchy and Paradise by horseback. This is an experience I will remember for years to come. Dart Stables offers two tours: one 2 hour tour of Glenorchy, and a second 1 hour Hobbit Tour where they take you to various film sites. I did both tours and had a blast! The staff were incredibly kind, and the horses were clearly loved and well cared for. The one hour Hobbit tour was by far the easiest, and little to no previous experience was needed to take part. 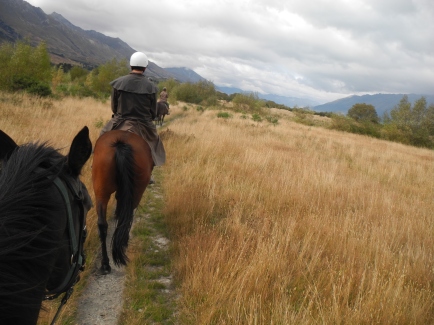 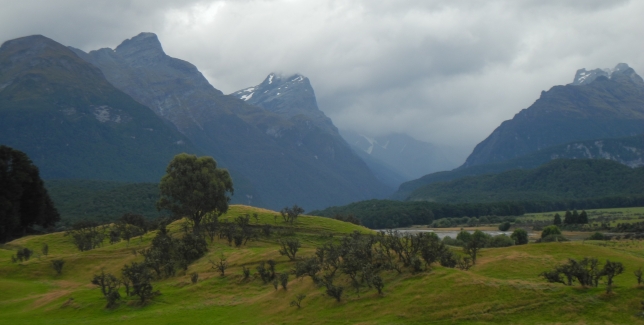 I think you have to be blind to miss Weta Cave… there are literally two giant trolls guarding the doors. What is Weta Cave/Weta Workshop? Why, it’s only one of the most magical places! Weta Studio (housed in Weta Cave) is responsible for building most (if not all) the props and special effects for Lord of the Rings and the Hobbit. But they have also done more than Lord of Rings, including  District 9, Xena the Warrior Princess, Avatar, and Thor just to name a few.

When entering Weta Cave you are confronted by life size props and replicas from Lord of the Rings, many of which you can buy. Weta Cave is free and you could easily spend an hour looking at all their merchandise. However, I highly recommend doing the 45 minute tour of Weta Workshop as well. During this tour you get a chance to get up close and personal to many of the props they have made and talk to some of their artists to see how they make such real looking props. The tour cost about 45 NZD. 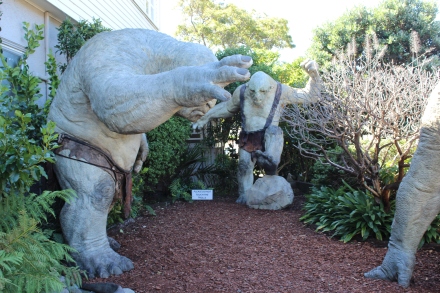 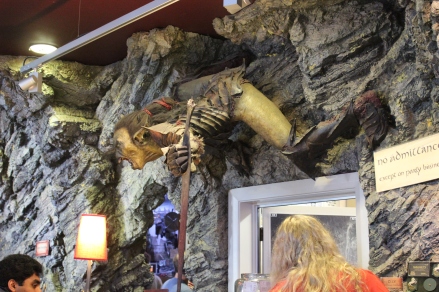 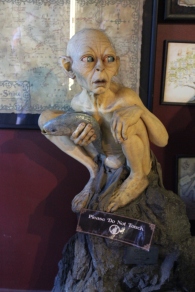 No geek filled trip to New Zealand is complete without a visit to the Shire to have a pint of ale at the Green Dragon. The Shire can only be experienced by tour. At the end of the tour you are left at the Green Dragon to enjoy a pint of Hobbit Ale. Incredible! This is the actual set made for the Lord of the Rings and the Hobbit films. You get to walk the path that Gandalf and Frodo rode through on their way to Bag End at the beginning of the first film. It is truly an incredible experience! The tour cost about 79 NZD, but it worth every penny! The Shire is located at: 501 Buckland Rd, Matamata, New Zealand. 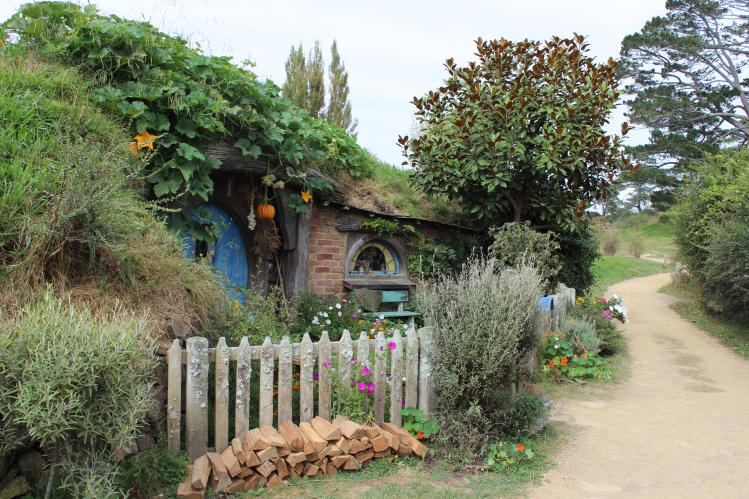 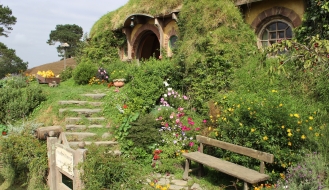 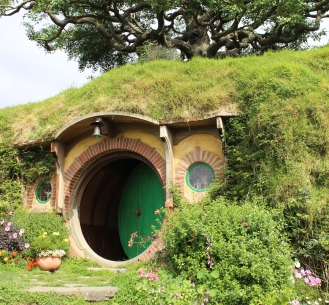 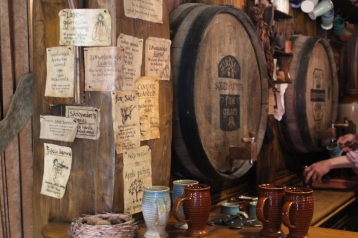 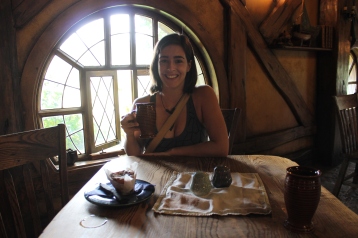 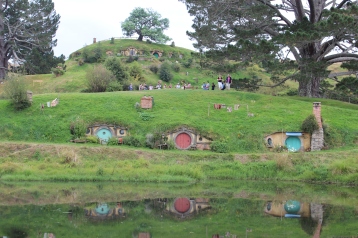 I hope this has helped you plan your next geeky trip! Leave any questions or comments below. I look forward to hearing from you!

-Teresa, the Type A Trekker I am a registered nurse working in my community ED. I am a BIG geek, former ballerina, and most importantly traveler. I was bitten by the travel bug at a young age and have been traveling ever since. I am a bit type A, and most of my trips are planned almost to the minute. However, I do know about the importance of impromptu travels. I love walking my way through a city, including getting lost at times. I also love to eat my way thru a city. Food is such an important part of a culture and can tell you a lot about the people and their history. Plus it's supper yummy! View all posts by Teresa D.